We showed you 3 awesome banners yesterday for The Hobbit: The Desolation of Smaug.  Now check out two more.  The first is of our favorite wizard, Gandalf the Grey, played by the amazing Sir Ian McKellen.

This second poster shows the familiar face of Legolas, played by Orlando Bloom, fighting alongside the female elf specifically created for the film, Tauriel, played by Evangeline Lilly.

Don’t forget to check out the newest Hobbit trailer, that hints somewhat of a stirring of feelings between the two. 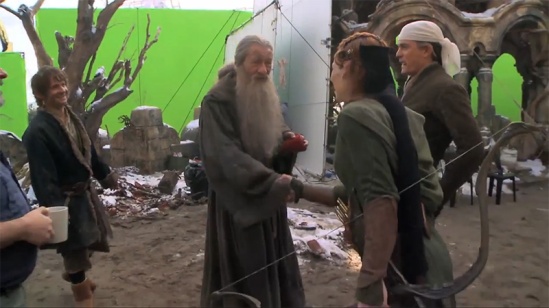 It’s a sad, sad day for those who were hoping to see some footage or the cast and director at this year’s San Diego Comic-Con, but unfortunately, not everything is premiered there, much to the delight of those not able to attend.

Right off the bat in this latest The Hobbit production video blog, Peter Jackson made the announcement that he, nor anyone else, will be able to go to Comic-Con this year and present any exclusive footage for attendees.  This is unfortunate indeed, but it seems that Peter does have good reason to not be able to show anything, as they are still hard at work in New Zealand working on pick-ups, and he just won’t have the time to edit an exclusive video, fly all the way out to San Diego, stay for a day, and fly all the way back to New Zealand.   Because of all the work needed to get done in time for the release of the 2nd movie, I can see why it is with a heavy heart that he can’t give us this.

With that said, hopefully, he’ll be able to give us something for 2014’s Comic-Con.

Now, watch the video below to whet your appetite, which shows you the return of certain well-known actors for their last time on the set, talk of the Battle of the Five Armies, Dwarvicise (you have to watch), Radagast poo, and Orlando Bloom on fake-horse-riding (you really have to watch).

Like Ian McKellen and Evangeline Lilly, Orlando Bloom has now finished shooting his parts for The Hobbit: The Desolation of Smaug, Peter Jackson announced yesterday on Facebook:

A day after saying goodbye to Gandalf and Tauriel, it was time to farewell Legolas. What a great day it was, with Orlando battling a serious Orc for all 12 hours of shooting – part of the Battle of the 5 Armies for the third Hobbit movie.

Lucky for us, he also posted this AWESOME video

When we finally got the day done, we said goodbye to Orlando, had a couple of beers … and couldn’t resist doing this!

That is Orlando’s take on They Are Taking The Hobbits to Isengard, which you may remember from a few years back.  If not, here it is!

In a delightful turn of the table, actors Lee Pace (Thranduil), Orlando Bloom (Legolas), and Evangeline Lilly (Tauriel) give their reaction to a reaction video of two of the staff members from TheOneRing.net, Kili and Fili.  Not only that, but the actors do so while in costume!

Thanks to Peter Jackson for filming it.

You can watch the original reaction video of Kili and Fili:

What do you think??

We get a lot of Lee Pace (Thranduil). We get some Evangeline Lilly (Tauriel). As usual, there are plenty of mangled, evil creatures and eye-popping landscapes. And — if the title didn’t give it away — a dragon, who happens to be named Smaug (Benedict Cumberbatch).

But the inclusion that excited me the most was seeing our old friend Legolas talking politics with Tauriel. Apparently, he hasn’t yet discovered his love for dwarves. Only Gimli can make that happen.

There’s been some outcry among hardcore fans that the Peter Jackson-created character, Tauriel (played by Evangeline Lilly), is an ill-intentioned plea to woo the romance crowd. We’ve been fans of the move at HobbitFandom.net, and so is TheMarySue.com:

There are some folks out there incensed that Peter Jackson has added a character to The Hobbit, a sentiment I almost entirely lack sympathy for. In another case, I might understand, but unlike The Lord of the Rings, with its four women (three of whom appear in one scene each), The Hobbit has exactly zero named female characters. Jackson’s inclusion of material from the LotR appendixes have already brought Galadriel into a story in which she otherwise does not appear, and that’s about as far as he’s likely to get with canonical characters, since Liv Tyler hasn’t been hired on. So those of you who, like me, welcome the addition of Evangeline Lilly’s Tauriel, kickass commander of Mirkwood military forices, will be interested to see what her character looks like, as revealed by some action figures.

They also have shots of the new Tauriel action figures: