Exclusive from Warner Bros. and Denny’s, a look into the set and making of Beorn’s house. This was one of my absolute favorite parts of the book when I was a child. I am very excited to see how it is portrayed in the movie. The link to the video is here.

Just released from the Hobbit Fan Event, this three-minute sneak peek consists of many bits of new footage that will have your inner hobbit squealing in delight! (I should know!) Featuring glimpses of Boern, Bard the Bowman, Azog, Smaug and many others, this fantastic compilation reminds us of how close we are the premiere! (38 days!) A link to the Youtube channel is here. Now bask in the glow of this sneak peek of The Hobbit: The Desolation of Smaug, coming to theaters in America on December 13, 2013.

As fangirlish.com reports, Peter Jackson and co. have released TV spots No. 4 and 5 in anticipation of the second Hobbit movie, set to hit theaters on December 13th. Let’s take a look!

This one features a lot of familiar imagery, with emphasis on themes brought out in Unexpected Journey and several shots shown in previous trailers. One thing that stands out is the bright-colored, overly active effects, which are certain to dazzle those who love the new-age 48 frames-per-second glow, yet frustrate traditionalists who are still clinging to the Lord of the Rings films.

Here, the emphasis is more on Bilbo and his journey, but there are several moments that ought to excite Hobbit fans considerably. For one thing, it never gets old catching glimpses of the barrels — one of the novel’s most iconic scenes — and the Bilbo-Gandalf dynamic definitely connects well with the successful Gandalf-Frodo tropes in LOTR. My favorite shot? Pause the video at 12 seconds, as the boat travels by water through a quaint, sleepy, almost Scandinavian fishing-looking village. What attention to detail! Often, it’s the set and world creation where Jackson does his best work, and it looks like fans will get plenty of that to chew on.

Less than two months to Desolation of Smaug! Who’s excited?

Check out the 3 banners that showed up today for the upcoming sequel The Hobbit: The Desolation of Smaug movie, which opens in theaters December 13, 2013.  The first banner shows Sherlock‘s Martin Freeman as Bilbo Baggins, along with a few of his band of dwarves, including The Mortal Instruments: City of Bones‘ actor Aidan Turner as Kili, and Richard Armitage, who plays Thorin Oakenshield.

The second banner shows actor Lee Pace, who’s currently filming in Marvel’s Guardians of the Galaxy, as the Elven King of Mirkwood (and Legolas’ father), Thranduil.

The third banner features Luke Evans as Bard the Bowman, a man of Laketown.  Luke is currently filming Dracula Untold.

A new trailer is scheduled to be released around 6am Pacific / 9am Eastern time tomorrow, October 1st.

Thanks to Page to Premiere for the tip!

It turns out the two greatest hobbits in the history of Middle Earth happen to share a birthday! 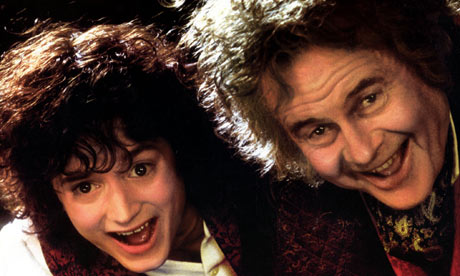 Coming Soon has posted a new poster and image from The Hobbit: Desolation of Smaug!

The poster is a simple reflect of Bilbo Baggins in the eye of Smaug:

Meanwhile, the still from the film gets us a look into the action-packed “Barrels out of Bond” chapter from the original book, including the arrow-riddled barrels! 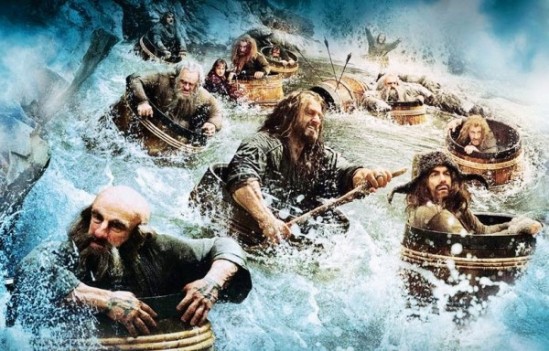 This was just begging to be shared!!!! So cute!!!! I sadly could not find the creator of this amazing work, but you can find this picture and many more on the page “Gandalf, Why you no let me pass?” Go and like them on Facebook!!!!! Now enjoy the cuteness!!

Bag End finally gets an internet connection! I bet Bilbo is checking out this very page! No wonder he doesn’t want to go outside! 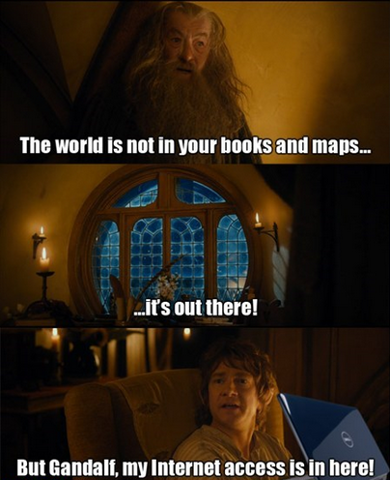 Whether you’re still waiting to see The Hobbit: An Unexpected Journey or you’re just wondering the Internet looking for clips to re-watch after seeing the movie already, here’s a great look at Bilbo Baggins’ first encounter with Gollum, courtesy of Coming Soon! 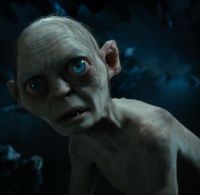